What do you get when you cross Andy Kaufman and Fred Rogers? Need a hint?

Surprisingly enough, you don’t get a unicorn! You get Sarah Silverman.

I have to admit, I didn’t know what to make of Sarah Silverman in the early part of her career. I always felt like an oddball because I wasn’t into her. I always felt I would like her as a person; so I kept an open mind.

Then a few years ago I caught Sarah Silverman: Turning Ignorance into Comedy on Fresh Air with Terry Gross. Towards the very end of the interview they discussed kids. It turns out Sarah Silverman is bonkers for kids. She isn’t a parent herself yet, but she is the best-aunt-ever to the families in her life. This interview was a game-changer for me. I was keeping my eye out for a Sarah Silverman picture book. That seemed a natural first step into children’s entertainment. Over the weekend she tweeted:

LET ME BABYSIT YOUR KIDS (Unless you have something against Jews) *FREE* UNCLE SARAH APP http://t.co/gBfPtYeglR — Sarah Silverman (@SarahKSilverman) September 1, 2013

Flashforward: Uncle Sarah is my new favorite storytime app, and I am a card-carrying SarahSilvermaniac.

This charming video-based interactive app is jim-jammed with stories, games, and songs starring Sarah and her mellow dog, Duck. But wait! It gets better. Hold onto your buns, librarians: the activities are *for the most part* DEVELOPMENTALLY APPROPRIATE! It’s up there with Don’t Let the Pigeon Run This App.

Uncle Sarah features 6 interactive activities: Sing with Sarah, Yay Storytime, Peek-a-Boo, A is for…, Sing the ABCs, and Don’t Wake Sarah. So far I have used two in storytime, and they were a huge hit. Due to the fact that  we are currently undergoing total renovation, we had to wipe out calendar this quarter. Instead we are offering a special service we call  “Sudden Storytimes” or “Spontaneous Storytimes”. Whenever possible, if there is a quorum of storytime kids in the department, and throw together mini storytime on the spot. I took the first opportunity to try Uncle Sarah on a group of my toddler timers from last session. I chose 2 activities to go along with a Not-So-Sleepy Storytime: Sing with Sarah and Don’t Wake Sarah.

I used this as my hello song. I told them I have a friend named Sarah, “who is a really good singer. She can write an awesome song right on the spot. Do you guys want to meet her?” (They did!) So I popped open the iPad, and there was Sarah playing her guitar. She started to sing,

She repeats this verse over and over again, more videos of her in different settings playing instruments pop up and join in. By the 3rd round all the parents had joined in, and the kids weren’t far behind. I didn’t have access to a big screen since I was doing this on the fly. The visuals weren’t necessary for this group activity, but they’d be fun for one-on-one laptime.  It is 1) a genuinely catchy tune; 2) silly-with-a-touch-of-irony; and 3) simple enough for young children to pick up right away. Success!

This is a very silly game. Sarah is tired. “I’m taking a nap,” she says, “Don’t wake me up I need to get my sleep.” She rests her head on her hand and dozes off. A little dream cloud pops up, and we get to see what she’s dreaming. AWESOME! Now the fun begins. I went around in a circle letting the kiddos poke the screen like little maniacs.

Sarah doesn’t wake up right away, but every poke elicits a reaction of some sort: bobbles, beeps, flips, and bloops. Sometimes she wakes up with a start, “Wha? Is it cartoon time?”Other times she just opens one eye, saying “Don’t jostle.” Then dozes off again.

They tried every trick they could think of to wake her up. My favorite was a little one who kept sneaking up very quietly, and tickling her right on the nose saying, “coochie-oo, coochie-oo.”

I tried to control the kids’ contact with the iPad in a way that built anticipation.  When she did wake up my storytimers went bananas.  They never got tired of it, and to be honest neither did I. Luckily, I did the book and rhyme in the middle, because I totally lost track of time. I finally noticed a mom glancing at her watch, and wrapped up with my favorite closing activity.

One piece of advice before you use it with front of a group: 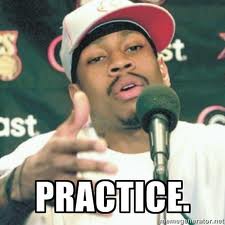 Like all the best interactive storytime books (e.g. Press Here, There Are Cats In This Book, etc.), timing is everything. So play around with it. And don’t be afraid of improvisation! Storytime is not a performance (although I suppose that’s a matter of debate among librarians). So fine, perhaps it is a performance. However, in my storytime room it’s more Improv Olymic than Steppenwolf. I adhere to the rules of improvisational comedy. My favorite rule is: say, “Yes, and…”

Happy Flannel Friday Everyone. Katie is hosting the #FFRU on her delicious blog: Secrets & Sharing Soda.

One thought on “Flannel Friday: Sarah Silverman Storytime Tour! (coming to an iPad near you)”